May 04, 2020
All of these stock do pay a very nice dividend and I would recommend buying these stocks and holding.
The stocks I love:

There are few technology companies with the scale of Apple, and that alone makes it a stock I want to hold long-term. But what I really think Apple has going for it is an amazing ecosystem of products that works seamlessly together and seems to be able to grow year after year.

iPhone is definitely the center of the Apple ecosystem, and it drives iPad, Mac, Apple Watch, and even new Apple Card sales. On top of that, services like the App Store, iCloud, and Apple TV+ fit with these products and create a seamless experience.

The way that Apple has built the ecosystem allows it to charge a premium for products versus competitors. iPhones, watches, and even TV boxes are more expensive than those offered by competitors because they'll work with a consumers' other devices and won't become bricks because they stop being supported (see Android devices).

Apple is also incredibly strong from a balance sheet perspective. It has $206 billion of cash and securities on the balance sheet and is generating about $60 billion per year in free cash flow, making it arguably one of the better value stocks on the market. That's a great combination, and I see no end to the company's tech dominance right now.

Content is the name of the game in the media business, and no company has better content than Disney. After acquiring Pixar, Marvel, Lucasfilm, and Fox assets, it was able to launch Disney+ and have arguably the best library in streaming from Day 1.

But the reason to own Disney stock long-term is its superior cash flow model. Disney doesn't just make money from movies, TV networks, streaming, or theme parks -- it has all of the above. In fiscal 2019, Disney generated 36% of revenue from media networks, 38% from parks, 16% from studios, and the rest from other sources. If you look at a competitor like Netflix, it has just one revenue stream, and it would take decades to build out a physical park infrastructure to match Disney's.

I think Disney's content and its multiple ways to reach and generate revenue from customers will be valuable for decades to come. And now with one of the best streaming apps and tens of millions of subscribers, it's even disrupting its traditional business and entering a new growth market. Innovation never stops at the House of Mouse.

Another well-known stock that should be scooped up aggressively by income seekers is beverage giant Coca-Cola (NYSE:KO). Shares of Coca-Cola have fallen by around a third since mid-February, which has subsequently pushed Coke's dividend north of 4%. Mind you, this is a company that's increased its payout for 58 consecutive years.

Coca-Cola's secret sauce is its geographic diversity and consumer engagement. In terms of the former, Coca-Cola is currently operating in all but one country worldwide (North Korea), providing it plenty of predictable cash flow in developed markets, as well as ample opportunity to grow sales in emerging markets. It's also worth noting that Coke has a whopping 21 beverage brands that are generating at least $1 billion in annual sales.

In terms of engagement, Coca-Cola has a number of ways it's reaching users. Its packaging and holiday-themed imaging have always helped it stand out and connect with consumers of all ages. Lately, we've even seen Coca-Cola turn to social media influencers to broaden the reach of its message.

The point is that no matter what is thrown Coke's way, it just keeps innovating and reaching new customers. That makes it an exceptionally safe dividend stock to never sell.

Popular posts from this blog

Now in today's episode we are going to be looking at the top e-commerce stocks to buy in 2020. Any questions let me know! Now all these e-commerce stocks are going to be growth stocks. Oh, this means these stocks carry more risk than ETFs and blue chip stocks. In my opinion I think it's smart to have a nice solid base of ETFs or bonds to act as your defense in your stock portfolio before investing into some e-commerce stocks Best Stock Market Course: https://bit.ly/carterfarrschool What is E-Commerce? E-commerce is the activity of electronically buying or selling of products on online services or over the Internet. Top E-Commerce Stocks to Buy Amazon (AMZN) Shopify (SHOP) Alibaba Group (BABA) Chewy.com (CHWY) PayPal (PYPL) Walmart (WMT) All of these Ecommerce stocks have a ton of long-term potential. These are some of the top e-commerce stocks to keep on watch in 2020 .
Read more

Why I am BUYING Bitcoin! (Cryptocurrency For Beginners)

How to Start Investing in Stocks? 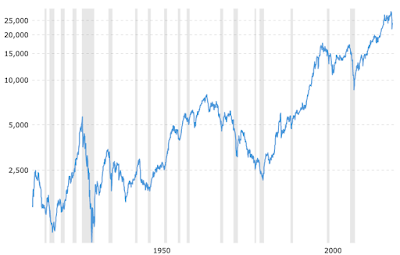 Why Should You Invest? In order to build your wealth, you need to invest your money. Investing in the stock market lets you build wealth without working, your money will work for you, instead of working for your money. Do you have to invest in stocks to make money? No, there are hundreds of different investments like real estate, art, baseball cards, and bitcoin (for some people). Why Stocks? The main reason why I  invest in stocks is that its very easy for beginners. You could download and sign-up with Robinhood and start buying stock the same day! Also if you invest in a low-cost index fund, on average you will profit 8-12% per year. The last reason is that everyone has the same opportunities to make money. Dow Jones 100 Year Chart How to Start Investing 1) Invest in Education Now I believe that before you open your brokers account you should invest in education. This could be anything from reading books, reading articles, buying a course, watching YouTube videos, a
Read more